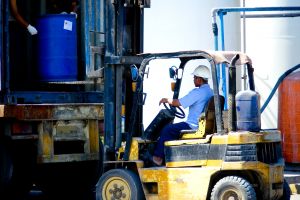 Though the number of fatal UK workplace injuries has significantly reduced over the years, the truth of the matter is that there are people who still lose their lives due to workplace accidents. It is sad to see that even when many workplaces remain potentially harmful and hazardous, there are employers that have done little to safeguard their workers.

Although both the employer and the worker have the moral and legal obligation of ensuring workplace safety, some of the accidents that continue to occur are just out of pure ignorance and negligence.

In a press release by the HSE, AAK UK Ltd, a sauces manufacturer has been fined £140,000 for the death of one Mr. Michael Moran, a forklift driver, who was hit by a lorry as he moved his forklift into loading position.

On 18th April, 2011 Mr. Moran was using his forklift to load a trailer that was parked outside the factory when another lorry reversed into the side of his forklift.

Mr. Moran had finished loading the trailer with mayonnaise tubs on one side and was moving to the other side to load the trailer when another lorry parked nearby started reversing. Witnesses said that despite Mr. Moran’s shouts, the reversing lorry still hit his forklift that overturned killing him instantly. The lorry driver heard the shouts but the lorry stopped a second too late as the 49-year-old driver died on the spot.

The Liverpool Crown Court was told that trucks regularly visited the site to pick up mayonnaise tubs or with deliveries and to avoid turning around in the cul-de-sac, most of them reversed down Davy Road.

AAK UK Ltd was fined heavily for it had not carried out adequate risk assessment for visiting drivers using the ‘Goods Out’ area and it had also not considered the risk the reversing lorries posed to its employees. Forklift drivers were also not given any training, information, or instruction on how to load the lorries and an investigation by the Health and Safety Executive (HSE) proved that there was poor supervision during the loading.

After pleading guilty to the breach of ACT 1974 of the Health and Safety at Work Law, the Hull Company was ordered to pay prosecution costs totalling to £22,657. The court also fined the company a further £140,000 for negligence that led to the death of Mr. Moran.

What the HSE Had to say after the Trial

Deborah Walker, speaking after the trial said that their investigating had revealed a dangerous and chaotic system and that it was easy to foretell that with the trend then it was just a matter of time before someone got injured or killed.

She further stated that neither the lorry driver nor Mr. Moran had a way of knowing of the preeminent danger and sadly, it was a little too late for Mr. Moran to get out of the way.

As an employer, do not just assume that your employees will know how to stay safe. You need to educate, train, and inform them on how to stay safe. Carrying out regular workplace risk and safety assessment is equally important.

The Hull Company created a no-parking zone after the incident and now forklift drivers have space to load the trailers without having to go out to the road. If such a measure had been put in place before then the tragic death of Mr. Morgan would have been avoided.

Do not wait until a tragic accident happens at your workplace so that you can seek professional workplace risk assessment. Call us today and we will help you address the risks before they turn fatal.