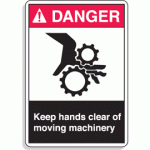 This week we have heard yet another example of a food company failing to ensure appropriate safety guards were in place and working, resulting in yet another hand injury. This is the fourth such injury within the food industry in the past few months, with all injuries resulting from the same lack of attention to safety guards.

What is especially worrying is that in at least two cases the food company concerned had already been issued multiple warnings from the HSE for that specific issue.

The most recent case to come to court relates to a food company in Ilkeston, in which an employee severed the tip of a finger in a mincing machine. The accident occurred as a result of the employee needing to remove mince from the outfeed of the machine. To reach the outfeed he had to remove a safety guard, aware that this was part of the design.

Worryingly the company concerned, Loscoe Chilled Foods Limited, had already been given advice by the HSE relating to the safety guard as a similar incident had occurred before.

A Catalogue Of Food Industry Failures

But this is only the latest in a catalogue of similar accidents occurring in food companies across the UK.

Earlier this year, in March, a Leeds based food company was fined £5,000 and ordered to pay £1,688 in costs following an incident involving an employee who very nearly lost two fingers, and suffered severe injuries as a result of a machine failing to have any proper safety guard fitted at all. An interlocked guard should have been installed, and in fact the HSE had already served an Improvement Notice on the company nearly eighteen months previously.

In October last year a North Yorkshire food company employee suffered a similar incident in which permanent damage to his fingers was caused due to the failure of the employer, Malton Foods Ltd, fitting a suitable guard to a conveyer belt.

Also in October last year TCK Fresh Produce Ltd, based in Buckinghamshire, was the location of an incident in which an employee lost part of her finger, resulting in permanent disfigurement. The employee pressed a stop button on a piece of machinery to clear a blockage, but was able to open the safety guard and reach in before the blades had actually come to a full stop. Again, the HSE had already issued several warnings to the company on five separate occasions before.

Every year there are around 25 fatalities and more than 17,000 injuries in the manufacturing industries according to the HSE.

Don"t let one of your employees become the next statistic. Call one of our Health and Safety Consultants today on 0800 1488 677 who will be happy to help.