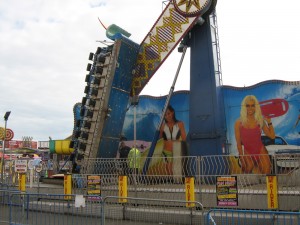 The thrill of the fair is often in the exhilaration that comes from being frightened. But the one thing we expect is to be safe. Fear within the confines of safety is fun, but it’s an entirely different scenario when that safety we rely on so much is no longer there.

Machines fail, and mechanical devices of any kind require regular maintenance, inspections and checks to ensure reliability. This applies to any mechanical device, from a hand drill to a car, from a lift to a fairground ride. Although not all machines potentially risk our lives, a good many do. Cars certainly do, and we entrust our lives to lifts on a regular basis.

Often we don’t tend to think of the safety issue much in these cases, because the fact that our lives are in the hands of someone else we don’t know doesn’t really occur to us. But when we go to a fairground we are very much aware that our lives are potentially at risk. These machines are designed to whirl us around at very fast speeds, often changing direction rapidly, sometimes flinging us up to great heights and dropping us quickly so that we feel that rush of adrenaline.

Unfortunately though, very rarely, things can go wrong. A case heard by Magistrates sitting in court at Skegness last week detailed exactly how a popular fairground ride went wrong, potentially putting lives at risk, injuring a great many people, and certainly having long-lasting impacts on a great many people. Magistrates also discovered why things went wrong, and who was to blame.

One of the popular rides at Skegness Pleasure Beach is the Surf Rider, a long row of seats connected to an arm which rotates quickly while the row of seats remains horizontal on a pivot arm. The mechanism involved, which is clearly under a lot of strain, requires regular oiling. Unfortunately the operator failed to check the oil levels frequently enough, or top the oil up, which resulted in a bearing inside a gear box overheating. This in turn caused the gearbox to seize, and in turn this resulted in several other elements within the machine to fail.

Once the mechanism started to fail the horizontal row of seats began to tip and rotate in a way it was never designed to do. This initially caused the occupants, many of whom were children, to be thrown in sideways. The arm on which the seating was attached eventually crashed into a section of the ride and came to land almost on its end on the ground at an angle of about 80 degrees, leaving people trapped sideways.

The fire brigade was called, but it took over an hour to release all of the occupants, many of whom had chest, neck and leg injuries. However, whilst these injuries have now healed, the psychological scars will last a great deal longer, and many of the young people involved will no longer entertain the idea of riding a fairground ride, and some are even afraid of lifts. The ride owner was fined £8,000 and ordered to pay costs of £8,000.

If you have any concerns about fairground rides or other similar rides such as inflatables, the Health and Safety Executive has published guidelines on which you need to know, and what you can do if you have a concern. You can read their information here: http://www.hse.gov.uk/entertainment/fairgrounds/public.htm

If you are a fairground ride operator, are looking to hire fairground rides or other amusement rides such as inflatable castles, call one of our Health and Safety Advisors free today on 0800 1488 677 and they will be happy to offer advice or arrange a site visit.