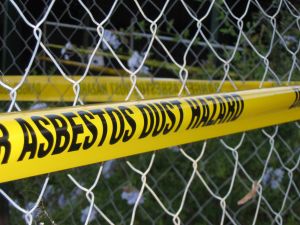 Although asbestos exposure is most commonly associated with industries that are involved in the direct handling of the substance, virtually anyone working in a pre-1999 building is at some risk of exposure.

And so it is that the Metropolitan Police is contacting thousands of officers past and present to warn them that they may have come into contact with asbestos particulate.

A routine investigation uncovered the presence of asbestos in buildings used at Metropolitan Police training facilities, most notably in the shooting ranges. Estimates suggest that up to 30,000 officers may have been affected between 1980 and 2007.

The specifics of how officers came to be exposed to asbestos have not been disclosed, but there are several possibilities. Poisonous dust is relatively common in buildings constructed before the 1999 ban on chrysolite asbestos came into force, and anyone working there could feasibly come into contact with it.

Businesses and public bodies should conduct a review to assess the presence of asbestos in their buildings, and whether employees are at risk of inhaling particulates. Where asbestos dust is present, they are obligated to have it treated professionally to reduce and prevent exposure.

Remembering the victims of asbestos

Although it may seem premature to contact 30,000 people “just in case”, the dangers of asbestos exposure cannot be underestimated or minimised. The HSE estimates that 10,000 people die every year in Britain from asbestos-related illnesses – a fact being commemorated this week by Scottish sculptor Jephson Robb.

Jephson has recently unveiled a new sculpture in Clydebank, which is to become the International Asbestos Memorial. Built out of stainless steel, the memorial was commissioned by the Clydebank Asbestos Association and is ‘for all those known and unknown’ who have died from asbestos-related illnesses.

Formed in the shape of a perfect cube, the sculpture has the name of 500 asbestos victims inscribed on a plaque. The other side of the memorial remains blank with space for more names to be added at an annual memorial service organised by the Clydebank Asbestos Group (CAG). Other portions of the sculpture will remain completely free of names to commemorate those persons who have died of asbestos-related illnesses, but who are unknown or unrecognised.

The CAG campaigns to raise awareness of asbestos-related issues, particularly those affecting workers past and present in the Clydebank area. Historically a shipbuilding region, asbestos was commonly used by local workers, leading to high rates of exposure. Formed in 1992, the CAG continues to push for improved standards for workers, and justice for those who have developed mesothelioma and other asbestos-related illnesses.

Unfortunately, annual asbestos-related deaths have yet to peak, suggesting that there will be plenty of new names to add to the memorial each year for the foreseeable future.

Latest from our blog